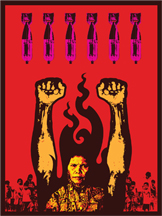 
OAKLAND, CA – Beginning May 20th, 2010, at the Asian Resource Gallery in Chinatown, East Bay audiences will get their chance to view over 30 posters created by activists from the Philippines and the United States in a traveling exhibit entitled FACT SHEET: Activism is NOT a Crime. The show draws inspiration from the one-sheet fliers circulated by human rights agencies whenever breaches of fundamental civil liberties occur.

In the Philippines, supposedly ‘Asia’s first democracy’, reports of these occurrences are altogether too common. In a country where the great majority of the population is in poverty, while a handful of elites control the resources, having viewpoints that differ politically from those of the ruling class can be tantamount to bloody murder.

Since President Gloria Macapagal-Arroyo took office in 2001, there have been 1,190 known cases of extra-judicial killings and enforced disappearances, without counting cases of arbitrary detention and torture; a number even higher than during the time of former dictator Ferdinand Marcos. The targets of these attacks are members of progressive partylists, church leaders, students, journalists, pro-people lawyers, and civilians from all sectors. Eyewitnesses and fact-finding missions, including delegations from the United Nations and Amnesty International, have all pointed to the Armed Forces of the Philippines as the culprit behind these atrocities.

These systematic acts of oppression carried out by a government against its own citizens are the primary subject matters dealt with in FACT SHEET.

Con Cabrera and Lian Ladia are the co-curators of FACT SHEET. Ladia is a Filipino-American member of the Bay Area art collective Kwatro Kantos, while Cabrera is a member of the Philippine-based artist-activist alliance known as Artists’ ARREST (Artists’ Response to the Call for Social Change and Transformation) .

“Art serves as a creative way of information dissemination regarding human rights violations in the country,” says Cabrera. “It does not only educate the audience, but more importantly the artists who make them. It makes the art community more involved in fighting these violations, and at the same time influences their works to be more socially relevant.

Since its launch on December 10th, a date that has gained observance as International Human Rights Day, FACT SHEET has reached audiences in the Philippines in university campuses and in guerilla set-ups during mass demonstrations. The show made its U.S. premiere last February at the historic International Hotel of San Francisco (now Manilatown Center).

According to Cabrera, FACT SHEET is “the artist community's response to the alarming increase and intensity of human right violations under the Arroyo administration.” The recent election, which was once again marred by widespread violence, intimidation, vote-buying, and voter disenfranchisement, did not find President Arroyo stepping down from power, but rather seeking to extend it in Congress.

An opening reception will be held on Thursday, May 27th, featuring speakers from the recent People’s International Observers Mission (PIOM) and performances by Yaminah Lunar, The Kasamas, and AYPAL dance crew. The event is free to the public, with doors opening at 6:00 PM.


FACT SHEET: Activism is NOT a Crime