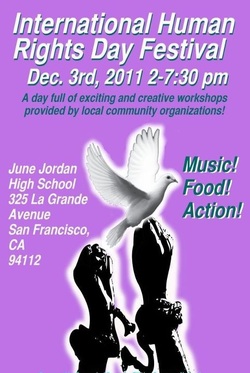 December 3 - International  Human Rights Day Festival  On December 10
We once again join the rest of the world in commemorating the International Human Rights Day. This significant event highlights the traditional calls of various sectors of society to defend and uphold human rights, mainly our political rights. Come election time, meanwhile, people get an equal share of their single right to vote. These circumstances left many contended at how they and the state dispense of their basic human rights. However, this is not ideal the case according to the Universal Declaration of Human Rights. It opines the rights of every human being to life and other socio-economic services that is the fundamental responsibility of every state.

Fifty years after that landmark declaration, Philippine society is still plagued by prevailing poverty, joblessness, hunger, and diminishing social services (housing, health, education) among others. On the other hand, the government continues to sell out our resources to foreign countries and open our country to plunder by foreign corporations thereby destroying livelihood and the environment. In essence, this is in violation of our basic and economic human rights, which the Bill of Rights stipulates in our 1987 Constitution.

Alongside, attacks against civil and political human rights prevail, with the human rights group Karapatan reporting that by the end of Macapagal-Arroyo’s term in June 2010, there have been 1,206 documented victims of extra judicial killings, 206 victims of enforced disappearance, and 337 illegally arrested and detained, while innumerable cases of torture, “hamletting”, harassment and intimidation, and other human rights violations were recorded. This pattern of impunity against civilians and progressive groups has extended to the new regime, wherein a total of 48 victims of extra-judicial killings, 5 cases of enforced disappearances, 29 cases of torture, 151 illegal arrests and 3,010 victims of hamletting have been accounted under President Aquino’s first year in office.

These glaring facts, however, do not usually get the attention of mainstream media nor is it being discussed at school or any ordinary forum. Worse, these medium of information and education have been badly influenced by vested interests to keep the status quo and thus, paving way for apathy and complacency to rein.

Making people aware of their basic human rights guaranteed by the Universal Declaration of Human Rights and the Constitution will therefore enable ordinary citizens to fully understand and act upon systematic and arbitrary abuses and violations of our rights by the state or any of its instrumentalities and how it circumvents processes and institutions to cover up its excesses and disregard to our fundamental rights. At a time where people bear the brunt of these in-your-face abuses and systematic violations of our rights, it necessitates an informed and collective action.

Karapatan-Southern Tagalog, UPLB ZoomOut Multimedia Collective, Artists’ Arrest and Southern Tagalog Exposure, in collaboration with other cultural and people’s organization in the region aims to refresh, if not sow awareness among citizens in the region of their basic civil, economics and political human rights and how to defend and uphold the same. Realizing these objectives entail holding of various cultural events to entice participation from students and schools, out of schools youth and communities, artists, professionals and the religious sectors. The major components of the campaign include, a Concert (Himigsikan para sa Karapatan at Katarungan), an Essay Writing Competition, Film Screenings, 10,000 Letters for Liberty, Human Rights Quilt and a Cultural Caravan.

As a pioneering activity, this is an open and continuing call to the people of Southern Tagalog to defend and uphold human rights. Recognizing the power and reach of culture and the arts, we are optimistic that in one-way or another, we can sow resistance among the public against attempts to curtail their human rights.